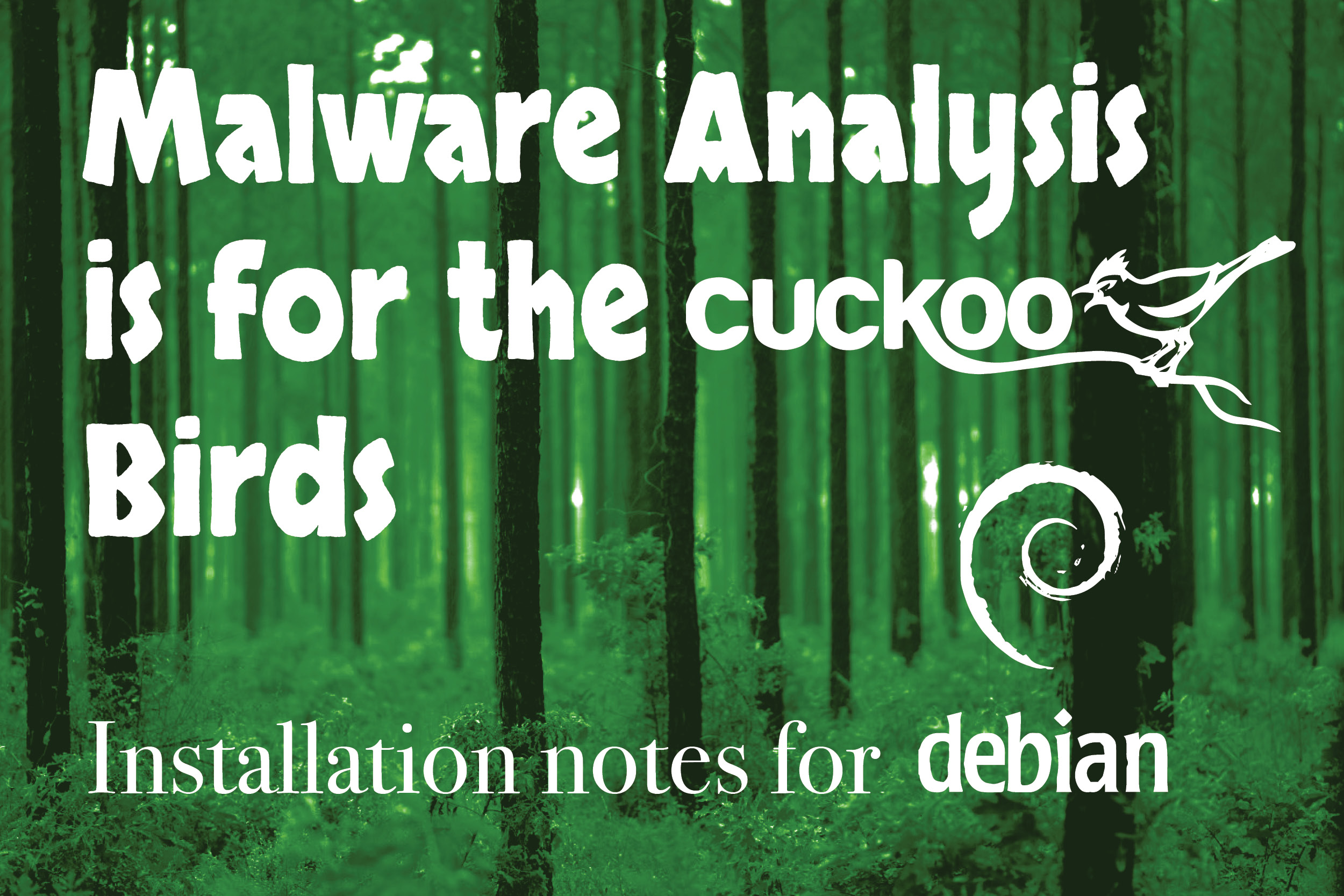 Cuckoo is written in the programming language Python and utilizes multiple Python libraries. First step is to verify that these libraries are in place and up to date. Cuckoo’s Documentation does a good job of listing the commands, but can be confusing. The following will outline the commands needed to install Cuckoo and provide a brief description about each part.

Cuckoo requires multiple different libraries. These libraries each in turn require others. Debian and Ubuntu aid in program and library installation, through the aptitude (apt-get) commands. It will not hurt to attempt to install a library or program if it is already installed on the system. The package manager will detect that it is installed and skip. The structure of the following commands will be: the command to issue in bold, followed by an explanation of what is being installed.

Open a terminal window, as a non root user, and copy/paste the following commands.

Iterates through the /etc/apt/sources.list file updating the local record with the newest version of the libraries and their dependencies.

mongodb -> A no-sql Database and is used in Cuckoo as a backend to the Django web interface.

Alternative to mongodb is to use postgresql. IF you plan on having a very large set of cuckoo sandboxes (such as a multi node environment) or you plan on submitting many malware samples, PostgreSQL is a good choice.

NOTE: I had an issue with “Profile for /usr/sbin/tcpdump not found, skipping” error message. To resolve use the following

This added the needed profile to get around the above error.

Gives permission to run tcpdump as root without Cuckoo being run as root.

To verify the setcap command issue the following

Output should be similar to

Install Volatility to enable the analysis to scan memory dumps from the VM. This can be time consuming. Instructions on how to install Volatility can are located on their site. For a basic installation of Cuckoo, this program is not added.

Inetsim Internet services simulation suite. Used to simulate the HTTP and DNS protocols. Any request from the client will be redirected to the Host. Specific responses are customizable.

Add the repository for the inetsim to the aptitude.

Pull down the inetsim key and add it to the apt list.

Update the list of available packages from the inetsim

Install the inetsim and its dependencies

Edit /etc/default/inetsim to enable the tool

NOTE: Cuckoo installation instructions say to use “pip install m2crypto==0.24.0” but this failed for me. Remove the “==” and it worked.

adduser -> Creates a new user with the name cuckoo.

Proxmox Log in as the cuckoo user. Proxmox does not have sudo by default.

Creates an isolated Python environment. Think of a python jail.

This creates a copy of the python libraries and source code that is independent from the rest of the system. It will be located in the current working directory.

NOTE: The command is “.” <space> “venv/bin/activate” do not forget the space.

From within the isolated environment use the pip command to install and upgrade pip and setuptools to aid in installing, upgrading, and uninstalling python packages.

You will know you are in the virtual environment when you see the (venv) prompt, as demonstrated in Figure 19.

Cuckoo is installed, now what? Now is the sometimes intimidating process of configuring Cuckoo. Cuckoo provides a lot of description in their configuration files, but sometimes it too much. So, I will outline the items to change in order to get a basic analysis server up and running with one VM. The newer version of Cuckoo provides a nice feature. When starting Cuckoo for the first time, it creates a directory, ~/.cuckoo, in the current user home directory, containing all the Cuckoo related files, and all results are also stored here. Run the following command, in the venv environment, to create this directory.

Setups all the configuration files and creates the working directory

Note the working directory will be written in red. See Figure 20. 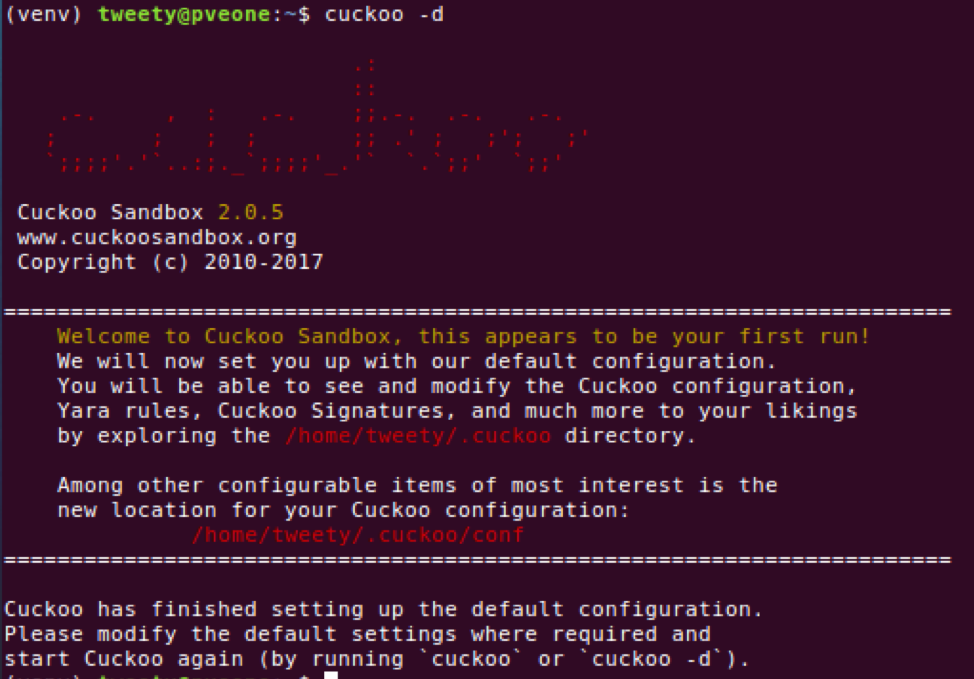 Located in the newly created .cuckoo directory is the conf directory. This contains the configuration files to setup Cuckoo. We will now walk through these files noting what needs to be modified for the basic functionality.

IP address is the address of the Result Server.

This is where the Agent in the client sends the data after the malware is run and is most commonly the IP address of the Host.

In VirtualBox, there is a virtual network with its own IP address range. The Host is assigned the 192.168.56.1 address by default. This can be determined by Opening VirtualBox Preferences.

Selecting the Network Tab and the Host-only Networks. There should be a vboxnet0. Select the vboxnet0 and click the screwdriver icon on the right. Remember this interface name, it will be needed in the next section.

This new pane will display the current settings for this vboxnet0 network. In this case, the Host IP address is 192.168.56.1. 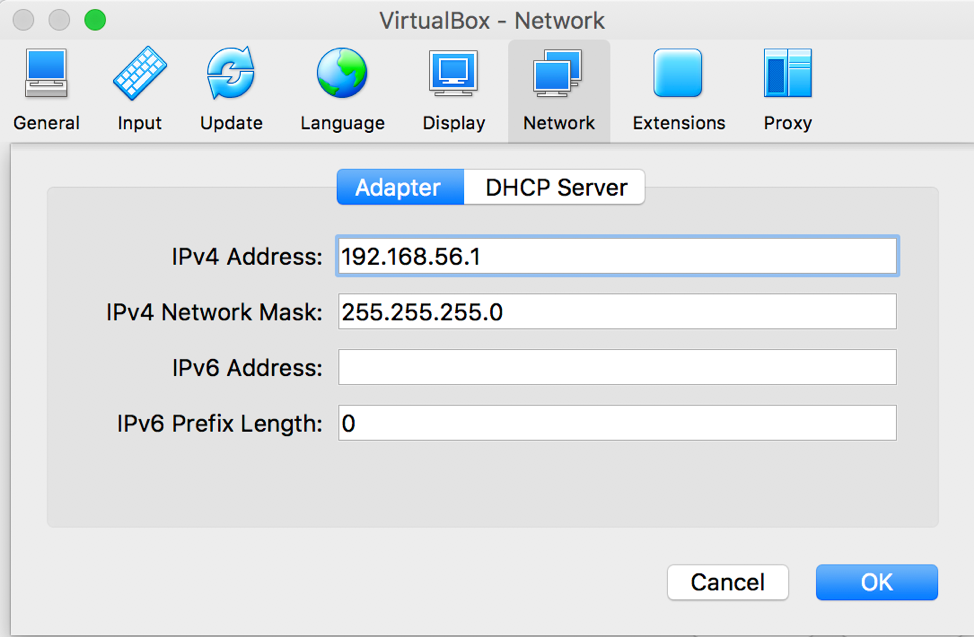 With the Guest VMs pulling from the DHCP Server with an IP address range from 101-254. Note: I statically assign IP addresses to my Guest VMs. This makes populating the <machine>.conf easier. 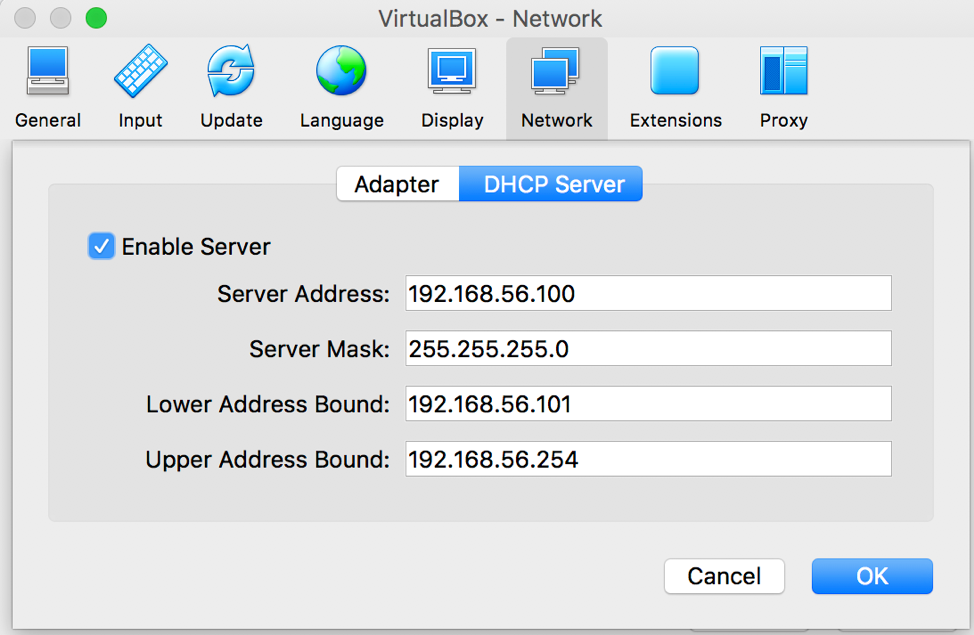 Port for the Result Server.

The IP address and port need to match the values configured in the config file that corresponds to the virtualization software being used. Ie VirtualBox has the config of virtualbox.conf

For basic install, just leave this as default. For more advanced installs, this allows to enable Man-in-the-middle attacks on SSL connections. Starting specific services like Honeyd is a good way to interact with the malware and record the interaction and results.

Virtual box requires the path to executable vboxmanage. Path can be found by running from the command line “which vboxmanage”

The interface name of the network adapter. This was gathered in the previous section. This can be overwritten in each of the virtual machine sections.

A comma separated list of VM names. These will match the names in the “[<name>]” later in this file. Figure 30 shows two (2) machine names. cuckoo1 and cuckoo1_Office. These machines will have a [cuckoo1] and [cuckoo1_Office] section.

The machine sections all start with the “[<name>]” see Figure 31. The name needs to be unique but does not have to match the name of the Virtual Machine. 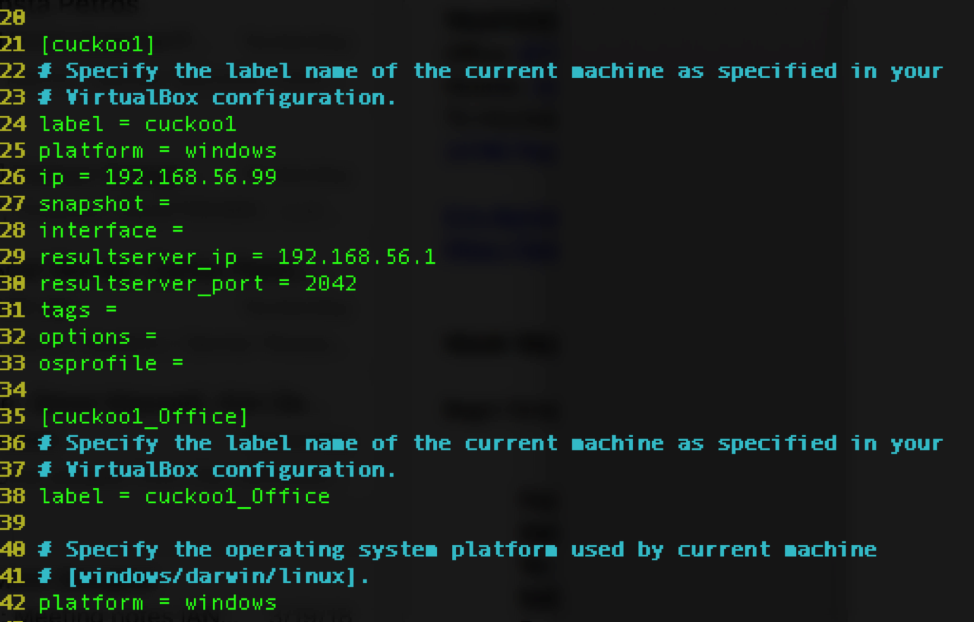 Label on the other hand, must match the name of the VM

IP address is the address given to the client machine. I statically assign the IP address to the clients. Given the network configuration discussed in the last section I have a dynamic range of 100-254, so my static addresses are below 100. In this case its 192.168.56.99.

Snapshot is the name of the snapshot to revert back to before the execution of the malware. If left blank, Cuckoo will revert back to the previous snapshot.

Note: The VM must have at a least one (1) snapshot.

The resultserver_ip needs to match the IP address assigned in the cuckoo.conf.

The resultserver_port needs to match the port assigned in the cuckoo.conf

This allows the configuration of Volatility, which will scan the memory dumps. If the virtualization software does not support this or Volatility is not installed, than skip this section. cuckoo.conf will have memory_dump = no

Used to control the analysis performed on the results. Configure depending on your needs, but for the most part can leave as default.

Stores configuration about the reports, which covers what is stored to where it is stored. If you want to use the Web front-end, under mongodb change enable = no to enable = yes 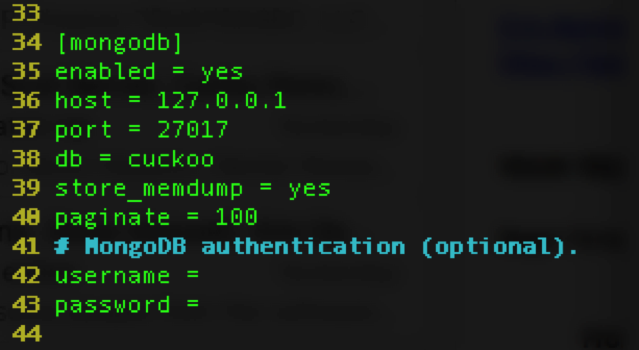 Other DB is supported for larger organizations such, as elastic search. Reports are also stored locally in JSON by default. The JSON reports are located ~/.cuckoo/storage/analyses/<Task Number>/reports/report.json

Setup routing options for the Cuckoo Rooter. This allows sample by sample or global configuration on networking. You can configure to allow no network traffic from the Guest through the Host bridged network, some specific traffic, or all traffic. It is very customizable.

By default, cuckoo does not download the latest signatures. To update the signatures from the terminal, run the following command

I schedule a task to run this command once a week.

Cuckoo communicates with the Guest VMs through a Python program named agent.py. This agent opens a port for the Host to connect. The Host will push the malicious file through this connection, along with the information on how to explode and analyze the results. The agent.py also creates a connection to the resultserver configured in the cuckoo.conf and the virtualbox.conf, sending the results of the analysis through this connection. The Guest VM needs to match the settings in the virtualbox.conf.

Static IP address same as in the <machinery>.conf file

Move agent.sh into the /etc/profile.d/ folder.

An alternative to adding the agent.sh to the profile.d directory, is to take a live snapshot of the Guest VM after the agent has been started. Every time the Guest is reverted to the previous snapshot, the agent will be running. This is valid for VirtualBox.

To start Cuckoo as a daemon, issue cuckoo from the VirtualEnv terminal. 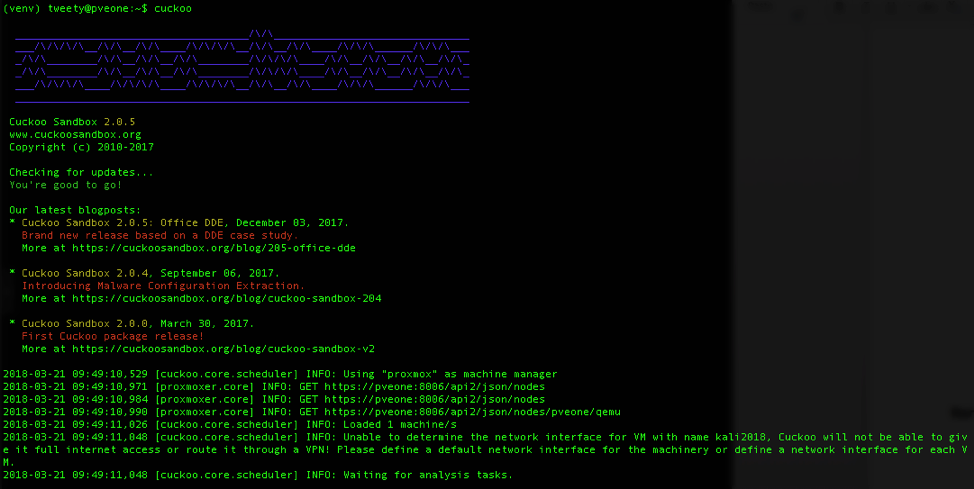 Start Cuckoo web open for everyone

For an example on how to modify Cuckoo to work with “Non-Supported” Virtualization platforms such as Proxmox continue reading the Making Cuckoo Work with Proxmox post. 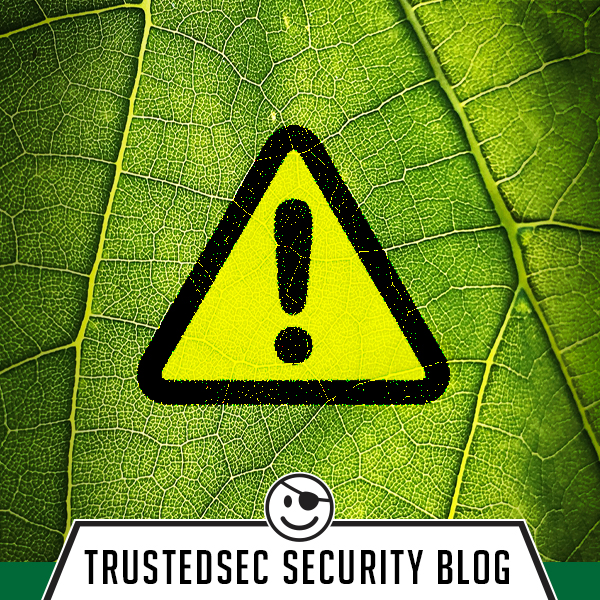 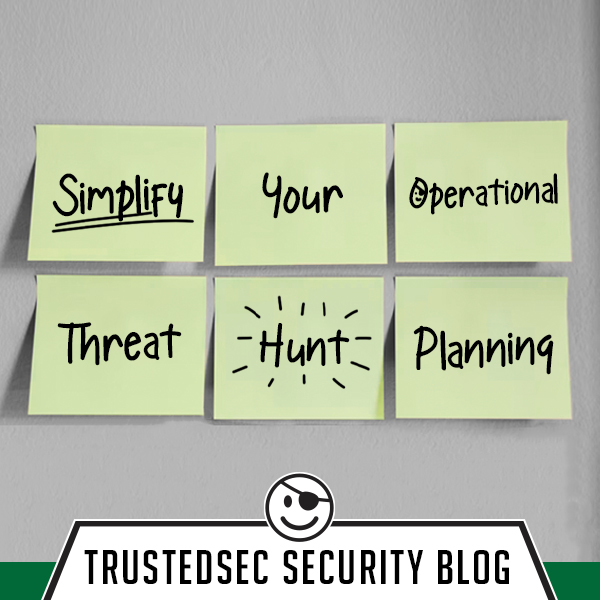